We invited three expert geologists (plus our very own Chief Technology Officer, David Chen) to June's Skycatch Mining Roundtable to find out.

Huge thanks to Chris Lane and Melissa Newton from Teck Resources, and Andy Jansen from Nevada Gold Mines for sharing their experiences. We learned a lot about how 3D data and drone capture have made the work of geologists and geotechnical engineers at highwall mining sites safer and more efficient. 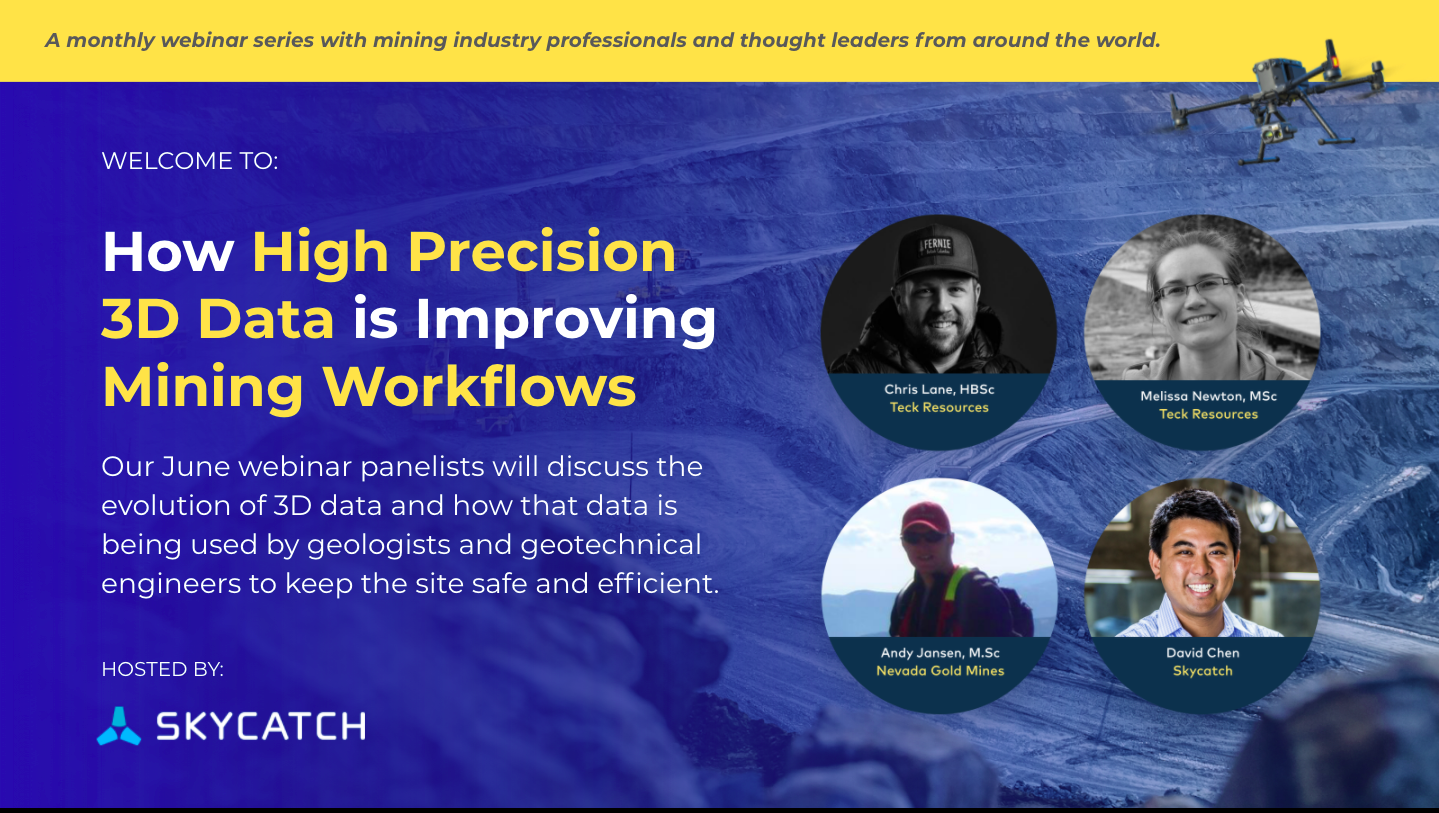 Here are some of the highlights from our discussion.

How are your mine sites using 3D data?

Geologists are using 3D data in conjunction with other scans, images, and information, to create better structural models of mining sites and waste dumps. What this technology allows them to do is to build up a bigger and more accurate picture of the geological structures they are working with.

For example, Melissa, working at the Line Creek open-pit coal mine in the Rocky Mountains, drills holes in the earth’s surface to gather information on what kinds of faults and folds lie below. But these drill holes are small and widespread across the site, so it’s hard to anticipate where the cracks might occur in between. By getting a drone scan as well, she can more accurately pinpoint where these irregularities are and get an understanding of what their geometries are like.

After comparing the data from the drill holes and the drone imaging, she can make some minor modifications to her map, and then drill more holes in between to confirm that the findings of the drone are correct.

Once she has a better idea of the site’s topography, she can feed this information back to the pit planners and engineers. Pit stability is critically important to the safety of personnel, and design plans have an undeniable impact on the bottom line, meaning this data is important to professionals on every level - literally from the ground up.

What is the advantage of using 3D drone-based data for this purpose?

Ten years ago, according to the panel, drone capture technology was not available for their sites. Geologists and other mining professionals relied on terrestrial LIDAR scanners to get their information. The terrestrial scanners require walking up close to the walls which is restricted at many sites today. And, the 3D often comes with holes if not captured at the exact right angle. Now, aerial 3D image capture can identify geological features within 5cm accuracy in a safer and much faster way.

Data from LIDAR scanning takes longer to process, whereas the drone data can be turned around in under 24 hours and, if using the Edge1 in-field GNSS base station and processor, in less than 30 minutes!

What issues have you been able to catch and solve with 3D data that you might otherwise have missed?

Chris, who also works at the Teck Resources Line Creek site, gave us a great answer to this one!

In the Rocky Mountains, where the mine is situated, there’s a lot of snow. Previously, they would have monitored the movement of their highwall there with radar, but when the snow melted, the site became inaccessible on foot, meaning there was a chance dangerous fissures could get overlooked.

By sending in drones, they have been able to spot cracks that might otherwise have gone unnoticed until a piece of material came down. These cracks can be up to half a meter wide by a whole meter tall by the time they’re visible - capable of causing a lot of damage.

If you spot faults or fissures in advance, though, you can take action. And the earlier you see it, the more proactive your response will be. Not just damage control. Drones allow for consistent and ongoing monitoring that lets you assess safety hazards and put protective measures in place before anyone gets hurt.

What advice would you give to companies looking to integrate 3D data into their workflow?

MELISSA: Don’t use it in isolation; leverage the data in all of your analysis tools including MineSight and others.

CHRIS: Budget for people’s time. 3D imaging throws up a lot of data, and you’ll need the right personnel on hand to analyze it.

ANDY: Try to fly the drones and take the images earlier in the year. As the seasons change, so will the face of your highwall. The lighting is better in the spring, and the walls are cleaner. You will get clearer pictures then.

Thank you to all of our expert guests for sharing your thoughts and experiences with all of us. To hear more from Chris, Melissa, Andy and David, why not check out the rest of the discussion? You can access it by filling out the form here.

This webinar is a part of a monthly Skycatch Mining Roundtable discussion where we bring together experts and thought leaders in the mining industry globally. Be sure to sign up for the July 13th event discussing tailings here.