What is Photogrammetry, and How Has it Evolved in Open Pit Mining?

In more academic terms, according to the American Society for Photogrammetry and Remote Sensing (ASPRS), photogrammetry is “the art, science, and technology of obtaining reliable information about physical objects and the environment, through processes of recording, measuring, and interpreting imagery and digital presentations of energy patterns derived from non contact sensor systems” (Colwell, 1977).

Input geo-tagged photos into a computer, and thanks to photogrammetry, you can use software to create a map, drawing, or even a 3D model of its subject. The typical outputs from a photogrammetric engine are 3D point clouds, 3D meshes, orthomosaics, and digital surface models (DSMs). There are various tools, including Data Hub from Skycatch, that can be used to measure and analyze these outputs depending on the need.

A 3D model of a highwall at an open pit mine was generated using the Skycatch high precision computer vision technology. This photogrammetry engine is specialized for open pit mine sites.

Capturing Inputs from the Air

Aerial photogrammetry uses geo-referenced images captured from the air. Image capture for aerial photogrammetry is usually carried out using drones or other UAVs. The camera is mounted in the aircraft and pointed at the ground or the vertical surface that is being mapped. Along its flight path, the camera will take a series of overlapping photographs. This enables capturing large areas at once vs single points in traditional surveys. 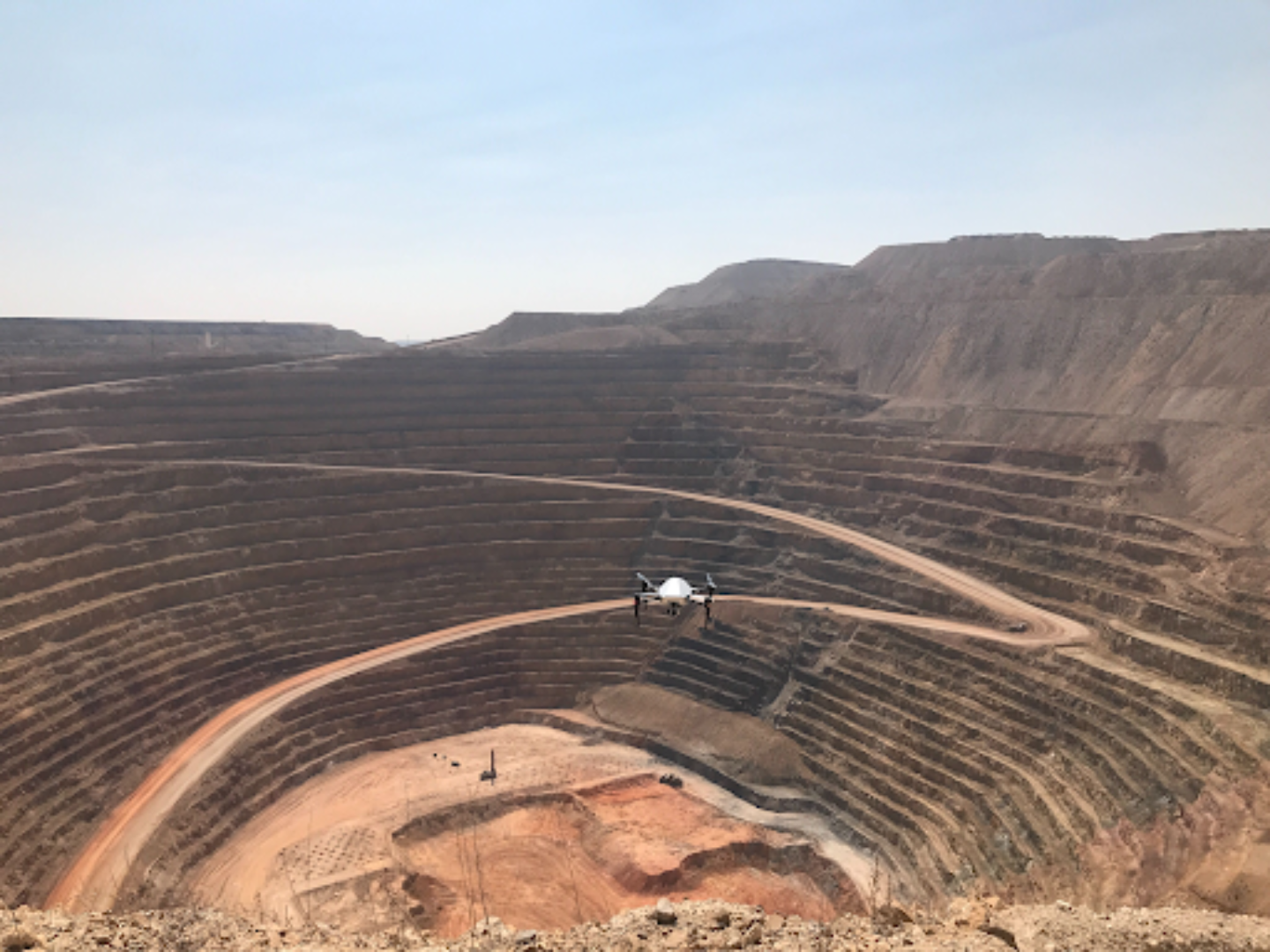 A drone captures geo-referenced photos at a mine to process into 3D models with photogrammetry.

Previously, the only way to capture highly accurate data using aerial surveying required the use of ground control points (GCPs). GCPs are points on the surface of the earth of known location used to geo-reference your drone imagery with high accuracy. Surveyors were required to physically place and identify these known points with ground markings that were visible in the aerial photos for later processing.

In more recent years, RTK and PPK technology has replaced the need for GCPs altogether for most high accuracy aerial mapping and surveying. Skycatch created the first end to end system called the High Precision Package (HPP) using RTK streaming technology during capture and PPK processing on the edge or in the cloud. 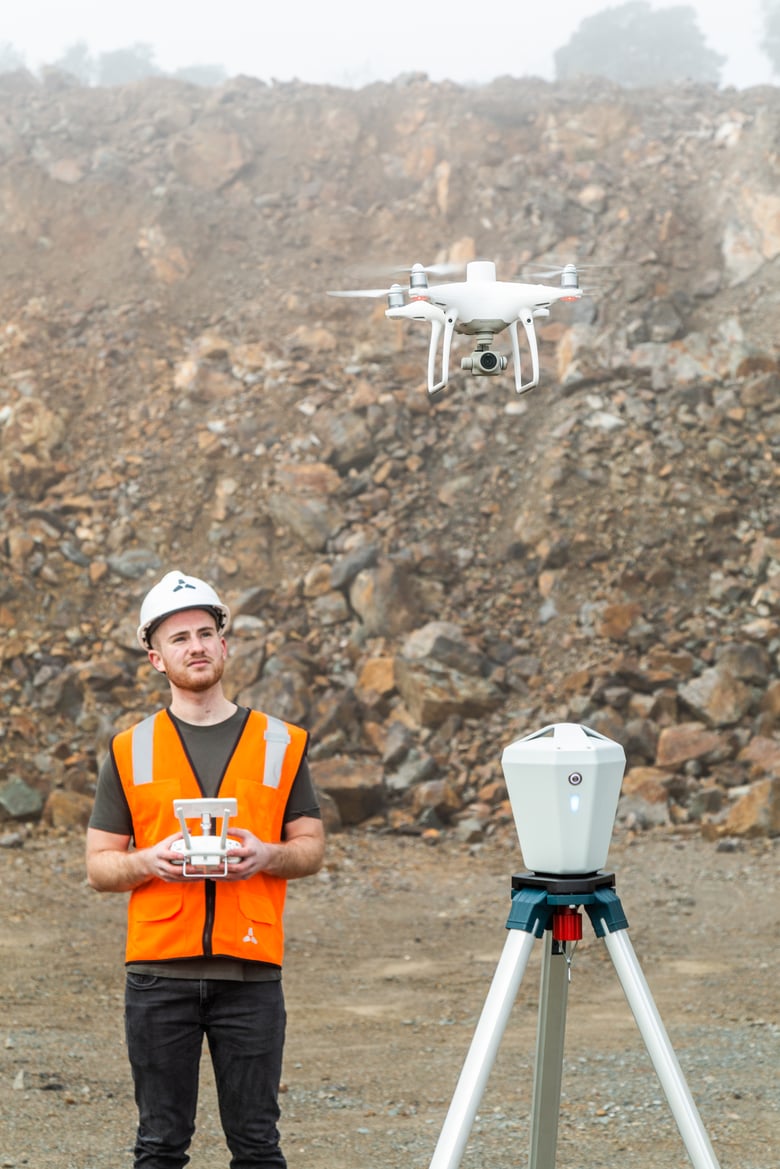 Today, drones like the DJI P4RTK are available with built-in RTK streaming capabilities and are compatible with the Skycatch High Precision Package.

Why Does This Matter for Open Pit Mines?

Stockpiles and highwalls at open pit mining sites are difficult to survey with traditional methods. In the past, workers would need to walk around the pile with GPS rovers to try and calculate the volume. For highwall data, geologists and geotechnical engineers would be required to walk up to the highwall to get the data needed to plan for optimal mineral extraction and/or identify any potential failure points.

When drones were initially added to the capture process, it simplified things to some degree. However, placement of GCPs were required to get the level of accuracy that was needed for these measurements and analyses.

All of this presented three main problems related to safety, accuracy, and efficiency.

Safety. The workers who needed to walk up to the stockpile or highwall to measure, analyze or place GCPs were in harm’s way, on unstable terrain and amongst dangerous heavy equipment on the site.

Accuracy. With GPS rovers or drones without GCPs or RTK streaming, the data captured simply did not provide the level of accuracy required to effectively measure stockpiles or accurately place ore bodies or fault lines when highwall pit planning.

Efficiency. Walking around taking measurements by hand or placing GCPs is much more time consuming than quickly flying a drone enabled with RTK data.

Where Do We Go From Here?

All sorts of assessments that would typically require a person on site now becomes possible.  As one example, instead of a person physically checking whether berms, toes and crests are at the proper levels as required for MSHA specifications, it can all be measured and checked digitally.

Additionally, it also enables these kinds of checks to happen in areas that were once unreachable by humans.  Imagine that as a pit is built and new benches are created, the top most benches (they can be 100m+ up) now become “reachable” with the help of high accuracy drone solutions.

The possibilities are endless.

With laser scan level accuracy, see why the top industrial firms in the world choose Skycatch to reimagine the process of building, tracking and inspecting complex and hazardous job sites. Our state-of-the-art computer vision engine transforms the photographs captured by drones into high precision 3D data and models. To find out more, please get in touch via our contact form today.