Apples & Oranges: Making the Most Out of Your Drone

Here at Skycatch, we’ve learned a tremendous amount from our customers using our platform and from our partners using a variety of systems for capturing aerial data.  As you read this article, customers are flying drones at commercial job sites all over the world.  The little known secret is that most people flying drones are being disappointed by the results.

The story goes something like this:  A project manager at a job site thinks it would be great to have a few aerial shots of his construction site or some cool marketing video to share the progress of the project with his customer.  He goes to his local Best Buy and picks up a relatively low-cost consumer drone.  After setting it up and trying a few practice flights, he decides to take it to his job site.  He flies the drone over his site and takes some great aerial photos and videos.   He lands, pulls out the memory card, and opens the files on his laptop.  He has some nice shots that he proudly emails to the team.   Maybe he sends his manager a copy of the flyover video.  He then puts the drone on a shelf and goes back to work. That's It. 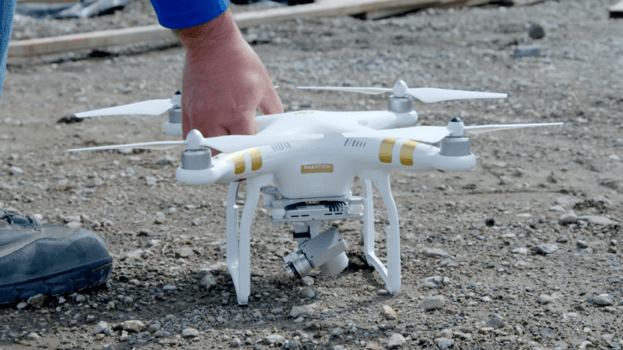 The DJI Phantom Pro, a popular consumer drone that, when used correctly,
can turn into a powerful commercial tool.

More and more people are flying drones, but haven’t really figured them out, and are missing out on huge productivity gains.

The fact is, people are buying drones thinking they are getting a powerful new tool to transform their commercial workflow, but in practice they are finding that the technology is falling short.  One of our customers put it this way, “People think they are buying an orange, but as they start to peel the orange they realize it’s not an orange at all.  It’s an apple.”

Now where did the project manager in our story go wrong and how can we get him his orange?

The simple keys to success

In order for a drone to reach its full potential on a job site, two things need to happen:

Let's look at each of these one at a time.

Sending a few aerial shots to your team is cool, but does it improve efficiency?  With a platform that allows our project manager to not only view a high-resolution aerial map, but to coordinate his entire team's tasks around the information in that map, the value starts to go up exponentially.  For instance, imagine if the foreman could measure the size of a lot on the site so he could know exactly how many trucks he could park in a staging area.  Or if he could measure the volume of a dirt stockpile to know if he has to have more fill trucked in next week.  If he could have a high-resolution 3D point cloud without hiring an expensive survey team and import that point cloud into Autodesk software, now that adds real value.

The Skycatch Dashboard with the stockpile volume measurements tool. Flying regularly will give an unprecedented level of intelligence for users to act upon.

Construction sites are in a constant state of flux.  Being able to see trends over time and being able to “go back in time” to see how a project progressed (or where things went wrong) provides objective visibility to what happened on the site day-by-day, week-by-week, and month-by-month.  For example, if a supplier has repeatedly failed to drop off critical materials on time, with a historical aerial map, our project manager can demand specific corrective action or a refund.  With daily high-resolution site maps he can know in an instant whether the team is making the expected progress in a specific area of the building or if a certain area is behind schedule and prove to his customer that a stage of the project is complete so that he can invoice for a critical milestone to get paid faster.

Skycatch provides a solution that gives those keys to everyone, out of the box, and you can get it today.

Everyone can make it happen

The fact is people all over the world are flying drones on commercial job site and not getting what they want.  In less than 5 minutes of setup, they can get want they want out of it today.  By using the Skycatch COMMANDER app for DJI to plan the site mapping mission and uploading his images to the Skycatch Dashboard our project manager has access to all of these tools and can transform his consumer drone into a powerful commercial tool.

The more data he collects, the more valuable that data becomes as he finds areas for greater efficiency, reduces waste, eliminates errors, and ultimately increases speed and reduces project costs.  The project manager will have the orange he was looking for.  More importantly, he will learn what the leaders in the construction industry already know - that it’s not about the drone.  It’s about the data.

What meaningful data will you collect with your drone?

Get Skycatch COMMANDER and start your 30-day free trial with unlimited maps today.

Learn about subscription plans and features and get help getting started in our support center.